Six volunteer firefighters use machetes to cut a path through the vines and underbrush of the Chiquitano forest in Bolivia’s eastern lowlands. They’re approaching the leading edge of a fire that’s been burning for hours.

They attempt to smother it with shovelfuls of dirt and water they carry on their backs in tanks normally used to fumigate crops. But the smoke is getting thicker, the heat stronger and swirling winds push the flames forward. Realizing they are overmatched, José Zapata, the only trained firefighter among the group, orders his men to pull out.

END_OF_DOCUMENT_TOKEN_TO_BE_REPLACED

The growing intensity of wildfires and their spread to new corners of the globe raises fears that climate change is exacerbating the dangers.

Want climate news in your inbox? Sign up here for Climate Fwd:, our email newsletter.

In South America, the Amazon basin is ablaze. Halfway around the world in central Africa, vast stretches of savanna are going up in flame. Arctic regions in Siberia are burning at a historic pace.

While the Brazilian fires have grown into a full-blown international crisis, they represent only one of many significant areas where wildfires are currently burning around the world. Their increase in severity and spread to places where fires were rarely previously seen is raising fears that climate change is exacerbating the danger.

END_OF_DOCUMENT_TOKEN_TO_BE_REPLACED

Two people are dead and hundreds displaced after a massive fire swept through several towns in South Korea’s northeastern Gangwon province last week. The blaze was extinguished within a few days thanks to quick action from emergency responders, despite high winds that hindered the use of firefighting helicopters and helped the fire spread more quickly.

END_OF_DOCUMENT_TOKEN_TO_BE_REPLACED

The Suwung landfill in South Denpasar is not the only place burning in Bali at the moment.

A forest fire broke out on the slopes of Bali’s Mount Agung on Thursday.

Wooded areas around Daya and Kubu have been observed smoking, however, this fire’s not an easy one to put out.

The burn area lies inside steep terrain of the eruption hazard zone of Mount Agung, which persists at level III “standby” status for an eruption.

There continues to be an exclusion zone recommended by Indonesia’s volcanology center, encompassing a four-kilometer radius from the volcano crater, which has been extended and reduced back down to four kilometers a number of times since the Bali volcano rumbled back to life last year. Outside of this exclusion zone, Bali remains safe and tourists are urged by the government to still come for holiday.

Head of the Karangasem Fire Department I Nyoman Sutirtayasa said that his department has been coordinating with officers from East Bali Forest Protection Management (RPH) to put out the fire at an altitude of about 1,500 meters above sea level.

The officers are ready to start fighting the fire if it spreads further down outside of the exclusion zone, but at the moment the terrain is to challenging to access the burn location, according to the fire department head.

“The route to the (fire) location is difficult. The effort that can be done now is to prevent the spread of the fire to the lower slopes. If we go up, we do not dare enter the danger zone,” Sutirtayasa told Tribun Bali.

“The area of land burning is getting wider. The fire has reached the south of Mount Agung and has spread to forested land above Pajenengan Temple, Pempatan Village. The cause of the fire is still unknown,” Sutirtayasa said.

Meanwhile, Made Warta, head of the East Bali Forest Management Unit says that his officers have been working with local residents to try and contain the downward spread of the fire. They also dare not risk entering the danger zone, but they have been extinguishing flames trying to come down the mountain.

There are three apparent hotspots that have appeared and the burn area is estimated to be about a hectare, Warta told Tribun.

There isn’t even a hiking trail to one of the areas, Warta explained of the difficult access.

Hot weather and strong winds have been contributing factors in allowing the fire to spread and flare up.

The post Forest fire breaks out on slopes of Bali’s Mount Agung appeared first on Coconuts. 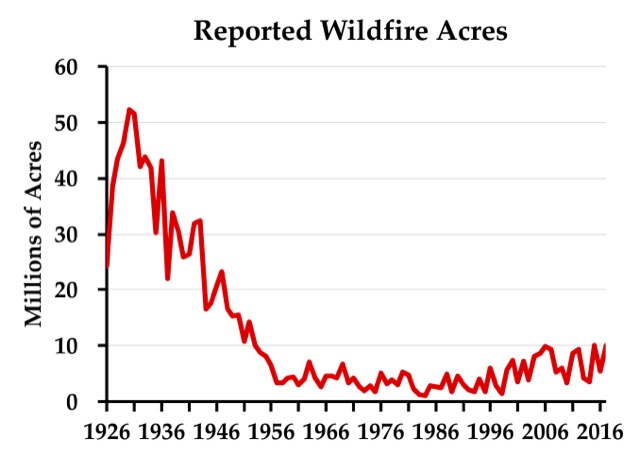 Some people use the data behind this chart to argue against anthropogenic climate change. The problem is that the data before about 1955 are a lie. Click image to go to the source data.

While some blame the increase in acres burned on human-caused climate change, skeptics of anthropogenic warming have pointed out that, according to the official records, far more acres burned in the 1930s — close to 40 million acres a year — than in any recent decade. The 1930s were indeed a decade of unusually bad droughts that can’t be blamed on anthropogenic climate change.

While the Antiplanner isn’t persuaded that recent fires are evidence of human-caused global warming, reports of acres burned from before about 1955 are not evidence of the opposite for a simple reason: the Forest Service lied. While the Antiplanner has alluded to this before, it’s important to tell the full story so that skeptics of climate change don’t reduce their credibility by using erroneous data.

The story begins in 1908, when Congress passed the Forest Fires Emergency Funds Act, authorizing the Forest Service to use whatever funds were available from any part of its budget to put out wildfires, with the promise that Congress would reimburse those funds. As far as I know, this is the only time any democratically elected government has given a blank check to any government agency; even in wartime, the Defense Department has to live within a budget set by Congress.

This law was tested just two years later with the Big Burn of 1910, which killed 87 people as it burned 3 million acres in the northern Rocky Mountains. Congress reimbursed the funds the Forest Service spent trying (with little success) to put out the fires, but — more important — a whole generation of Forest Service leaders learned from this fire that all forest fires were bad.

In 1924, Congress passed the Clarke-McNary Act, which allowed the Forest Service with (i.e., provide funds to) “appropriate officials of the various states or other suitable agencies” in developing “systems of forest fire prevention and suppression.” The Forest Service used its financial muscle to encourage states to form fire protection districts.

This led to a conflict over the science of fire that is well documented in a 1962 book titled Fire and Water: Scientific Heresy in the Forest Service. Owners of southern pine forests believed that they needed to burn the underbrush in their forests every few years or the brush would build up, creating the fuels for uncontrollable wildfires. But the mulish Forest Service insisted that all fires were bad, so it refused to fund fire protection districts in any state that allowed prescribed burning.

The Forest Service’s stubborn attitude may have come about because most national forests were in the West, where fuel build-up was slower and in many forests didn’t lead to serious wildfire problems. But it was also a public relations problem: after convincing Congress that fire was so threatening that it deserved a blank check, the Forest Service didn’t want to dilute the message by setting fires itself.

When a state refused to ban prescribed fire, the Forest Service responded by counting all fires in that state, prescribed or wild, as wildfires. Many southern landowners believed they needed to burn their forests every four or five years, so perhaps 20 percent of forests would be burned each year, compared with less than 1 percent of forests burned through actual wildfires. Thus, counting the prescribed fires greatly inflated the total number of acres burned.

The Forest Service reluctantly and with little publicity began to reverse its anti-prescribed-fire policy in the late 1930s. After the war, the agency publicly agreed to provide fire funding to states that allowed prescribed burning. As southern states joined the cooperative program one by one, the Forest Service stopped counting prescribed burns in those states as wildfires. This explains the steady decline in acres burned from about 1946 to 1956.

There were some big fires in the West in the 1930s that were not prescribed fires. I’m pretty sure that if someone made a chart like the one shown above for just the eleven contiguous western states, it would still show a lot more acres burned in real wildfires in the 1930s than any decade since — though not by as big a margin as when southern prescribed fires are counted. The above chart should not be used to show that fires were worse in the 1930s than today, however, because it is based on a lie derived from the Forest Service’s long refusal to accept the science behind prescribed burning.

This piece first appeared on The Antiplanner.

Randal O’Toole (rot@ti.org) is a senior fellow with the Cato Institute and author of the new book, Romance of the Rails: Why the Passenger Trains We Love Are Not the Transportation We Need, which will be released by the Cato Institute on October 10.

Based on the data from BMKG Pekanbaru Station that was updated at 7:00 am, Riau still dominates the number of hotspots on Sumatra Island since the beginning of this week. In total, there are 23 hotspots in Sumatra, and 12 of them are in Riau.

There are five hotspots in South Sumatra, three in Lampung, two in Bangka Belitung, and one in Bengkulu.

Head of BMKG Pekanbaru Station, Sukisno stated the number of hotspots increased compared to on Monday afternoon, September 24, which was 11 hotspots. Of the 12 hotspots, the most were in Pelalawan District, five hotspots.

The management of Bromo Tengger Semeru National Park (TNBTS) in East Java is investigating the cause of a wildfire that burned at least 65 hectares of the park’s savannah and vegetation on Saturday.

The fire had been extinguished by Sunday afternoon, but local residents said on Monday morning that fire had again broke out in the area.

TNBTS head John Kennedy said the park was continuing with its investigation.

“The cause of the fire is still under investigation,” he said on Monday. “It is estimated that the fire burned 65 hectares [of Savannah],” he added.

The fire, which burned through the Pentongan Block of the Laut Pasir (Sand Sea) Tengger Resort, reportedly broke out around 9:45 a.m. local time on Saturday.

Initially, the park deployed 15 personnel to put out the fire. The team was later joined by officers of Malang regency’s Poncokusumo Police and 83 local residents.

But the fire continued to spread, said John, and that around 320 people from the area joined the firefighting effort.

John said that the park management temporarily closed on Saturday the Jemplang entrance on its Malang side. The entrance was reopened after the area was deemed safe for visitors.

“We reopened the [Jemplang] entrance on Sunday afternoon. Tourism activities are normal,” he said.

By Sunday evening, most of the fire had been extinguished except for several hot spots on Mount Watangan. (sau)